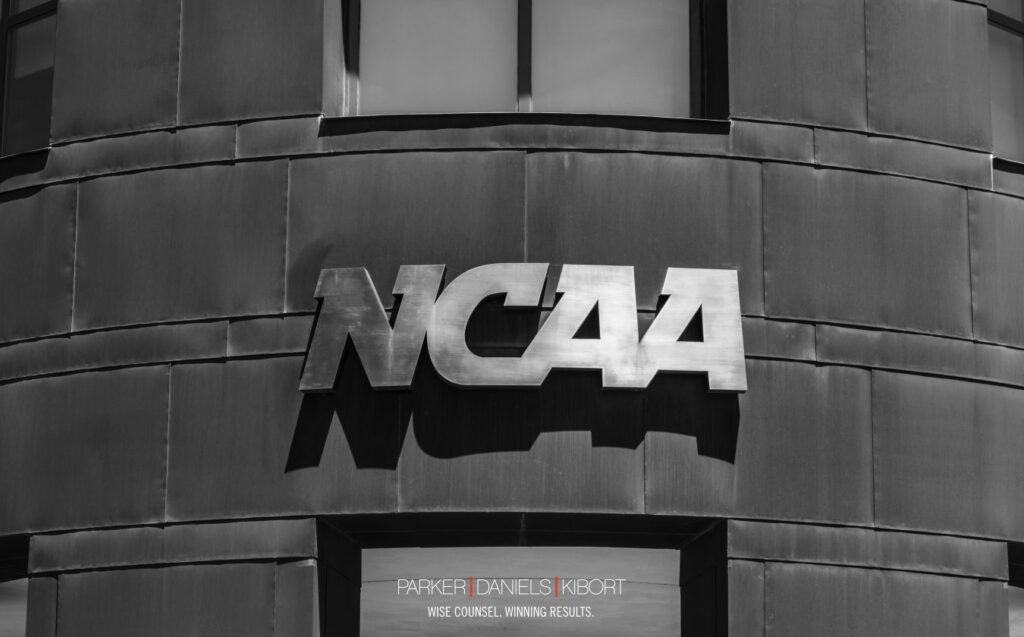 The Supreme Court has issued seismic decision for the future of college sports. Despite having come down mere weeks ago, the effects of that decision can already be felt throughout practice fields, classrooms, and statehouses nationwide.

In Nat’l Collegiate Athletic Ass’n v. Alston,[1] the Court unanimously ruled that the National Collegiate Athletic Association (NCAA) violated federal antitrust law by limiting compensation that college athletes may receive in exchange for their athletic services. Though the ruling does not “disturb the NCAA’s rules limiting undergraduate athletic scholarships and other compensation related to athletic performance,”[2] it opens the door to student athletes receiving compensation for their names, images and likenesses (commonly referred to as “NIL”). On June 30, just nine days after the Alston decision, the NCAA’s announced its new interim NIL policy, which took effect the following day. The NCAA made clear in its announcement that “[i]ndividuals can engage in NIL activities that are consistent with the law of the state where the school is located.” In other words, the NCAA itself no longer prevents students from profiting from their own NIL. However, individual schools, Congress, and the various state legislatures may, at least in theory, place restrictions on NIL income. In sum, under the new regime, a college athlete still cannot be paid directly to play a sport for his or her school; that player may only receive a scholarship from the university. In the wake of Alston and the NCAA’s own policy change, however, the NCAA may no longer prevent the same player from being paid for appearing on the cover of a new video game, a sponsored social media post, or even a non-fungible token.  Similarly, the NCAA may no longer prevent a player from receiving commissions from all jerseys sold with his or her name on it.

Thanks to the Alston ruling and ensuing action by states and universities, athletes and business throughout the country have been quick to capitalize on newfound opportunities. For example, an Iowa basketball player has already announced his own signature clothing line, and in Florida, one gym owner has even started a new company to promote NIL opportunities for University of Miami players. Many state legislatures acted just as quickly.  In fact, half of all state legislatures[3] have already passed some version of a law specifically protecting a college athlete’s right to profit from NIL. Kentucky’s governor issued an executive order affording the same protections. Of the states that have passed NIL bills, 13 of those states’ laws have already taken effect,[4] with Missouri (August 28) and Connecticut (September 1) soon to follow.

Despite having anticipated changes to the NIL framework, Minnesota has not yet passed NIL legislation. In February 2020, the Minnesota House of Representatives introduced HF 3329.[5] Under that bill, no college in Minnesota – public or private – could prohibit student-athletes from earning NIL compensation. The bill further prohibited any school or organization (such as the NCAA) from preventing student athletes from hiring agents to represent them in contract negotiations. The Minnesota Senate introduced a substantially similar bill following the Alston ruling, but neither version has been fully enacted. Regardless of when a bill passes in St. Paul, and which bill it is, Minnesota student athletes will almost certainly have some waiting to do before their NIL rights have full backing of Minnesota law. The various iterations of Minnesota’s current proposals would, if passed, go into effect either in 2023 or 2024.

The University of Minnesota Duluth issued its own policy, which requires “[c]ompensation for NIL use shall be commensurate with the fair market value,” and that a UMD athlete would need to disclose to the University any proposed NIL contract with a booster or fan club. What constitutes “fair market value” in an NIL market that, until last month, did not exist?  Time will almost surely tell. On the other end of the spectrum, the University of St. Thomas, which is poised to join the NCAA’s Division I this upcoming football season, has yet to issue a public NIL policy.

Amid the current patchwork of individual state and school regimes, NIL seems ripe for at least some degree of federal oversight. Congress ostensibly agrees. Several bills have been introduced in both the House and Senate in recent years,[6] with five such bills introduced since February 4, 2021.[7] No measure has yet passed, leaving states and schools the primary arbiters of NIL rights.

Without an applicable federal or state law, a college athlete in Minnesota would do well to carefully review his or her school’s own NIL policy – if such a policy exists.

Should you have any questions about navigating those waters, Parker Daniels Kibort would be willing and able to assist. Give us a call at 612.355.4100

[5] HF 3908, introduced in the House around the same time, provided for similar measures.